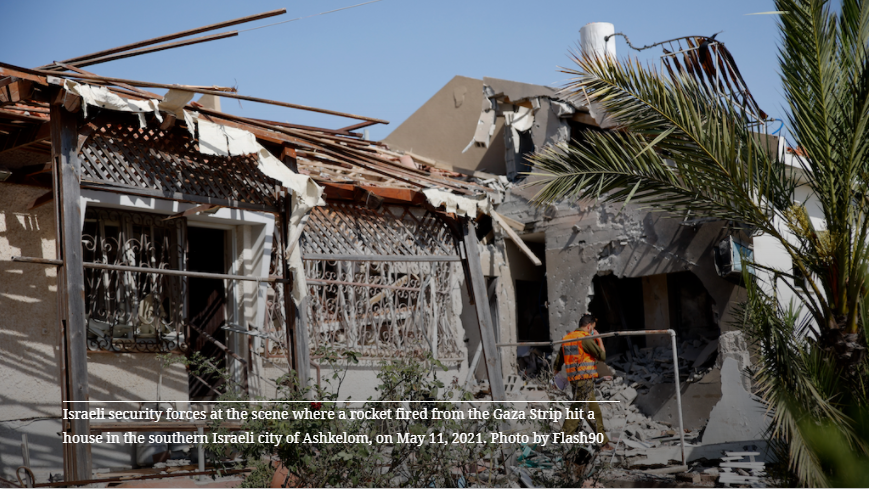 There has been unrest in Jerusalem since the beginning of Ramadan. On 10 May, the situation on the Temple Mount escalated. In retaliation, GAZA fired hundreds of rockets, aiming at southern Israel. However, the air raid alarms also went off in Jerusalem and Beth Shemesh.

In southern Israel, people have to take shelter from the hundreds of rockets fired into Israel from Gaza. Kay Wilson, herself a survivor of a terror attack, writes on her Facebook page: ‘The sirens continue throughout the day. Within an hour, 200 rockets fell on coastal towns, nearly 400 in total since 6 p.m. yesterday. Hamas is aiming the rockets at schools, apartments, hospitals and civilian targets. There is massive property damage and casualties. There is no other country in the world that would let these war crimes wash over them, while also having to defend itself in front of the complacent international media, for the ‘crime’ of fighting back.’

Elisheva Ronen-Luurs works as a pediatrician in a clinic in Ashkelon near the Gaza Strip: ‘This morning, a remnant of a rocket from Gaza came down in front of the clinic door. The missile had been defused by the Iron Dome (the missile defense system). But the shrapnel, sometimes weighing up to 15 kilograms, also caused quite a bit of damage. A missile also landed in a school nearby. Fortunately, the schools were closed today because of the current situation’. Most of the missiles are stopped by the Iron Dome system.

Benjamin Philip is the director of Hineni in Jerusalem. He lives with his family in Ashdod. Benjamin says, while on the road: ‘Just now I heard that fire was opened on Ashdod. My family is in the shelter, I am driving there now to be with them. On the one hand, it is terrible that we have to deal with so much unrest over and over again. On the other hand, I am grateful that I can be of significance here. I can really mean something here for the people of southern Israel. That’s what we always do again with Hineni: we support the population with relief supplies and especially with spiritual assistance.’

Hamas claims to have fired 137 rockets into Israel in five minutes.