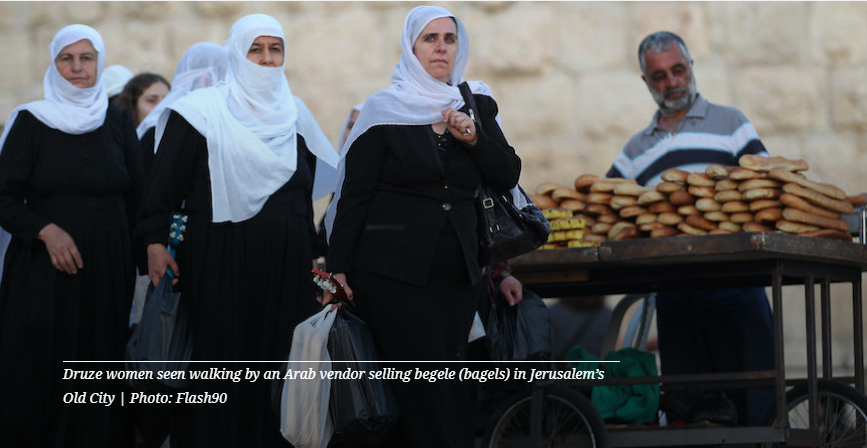 By Amit Barak.. Elias Zarina is an Arabic-speaking Christian born in the Christian Quarter in the Old City of Jerusalem. Elias works in the hotel industry in the city. More than once he told me that he met with pilgrims (Catholics or Orthodox) at the hotel and Elias repeatedly proves them wrong. When they hear that he is an Israeli Christian, they react in amazement, because the impression they came with is that in the Holy Land there are only Jews, Muslims and conflict.

Those who read only the usual headlines in the media can be excused for such thinking. Those who read a little more, however, will discover a very different picture. In order to get to know how diverse Israeli society is, you really have to sit down and study or travel in Israel, on a trip that departs from the conventional tourist routes.

“In order to get to know how diverse Israeli society is, you really have to sit down and study or travel in Israel, on a trip that departs from the conventional tourist routes”

Israeli society comprises a rich fabric of different religions, denominations and groups living side by side. This is possible because of the strong Israeli democracy that draws its power from Judaism and Zionism.

While 74% of the population in Israel are Jews, the truth is that Jewish society is complex and diverse. Further, the other twenty six percent are minorities and others without classification (about 4.8%).

The majority group within the minorities are the Arab Muslims (about 1.6 million), among them about 395,000 Bedouin. The Arabs live mostly in Arab cities and villages and preserve their religious and cultural way of life (Jews can hardly be found in Arab localities because selling homes to Jews in Arab villages is taboo for the Arab society). Others live alongside Jews and Christians in mixed cities like Haifa, Beersheba, and Jaffa.

Arab society maintains a certain distance from the State of Israel in the national aspect, many preserving a distinctly Palestinian identity. But in the economic, employment, academic, sports, educational, and cultural fields they are fully integrated. You can find Arab Muslims in senior positions in all professions – in the courts, in hospitals, in government offices, in banking, in national sport teams. You can also find Arab MKs in the Knesset (most of whom are hostile towards the State of Israel).

In recent years, more and more Muslim Arab men and women can be found in the National Service, which is also considered by Israeli society as a parallel service to the army. At the request of the Arabs (as well as at the request of some ultra-Orthodox Jews), this service is called today the National Civil Service. The word ‘Civil’ was added because they are more comfortable identifying with civil society in Israel than with Israeli nationality. In any case, the state has decided that it is a step that builds trust, and a change of this sort, increasing the inclusion of Arabs into National Service, needs to be implemented step-by-step.

However, most of them are absent (except a few and brave) from the symbol most identified with Israeli-ness, and which is seen as a final entry ticket into Israeli society,: service in the Israeli Defense Force (IDF).

The Bedouin – with their own cultural characteristics – live mainly in the north of Israel and in the Negev (in Israel’s south). The Bedouin living in the north have much more Israeli identity than the Bedouin in the Negev. The northerners integrate into society and enlist in the IDF more easily, and this is acceptable in their community. Among the Bedouin in the south, an ideological struggle is taking place between the State of Israel and the Islamic Bedouin movement.

The second group among the minorities are the Christians. In Israel there are about 175,000 Christians, most of whom are Arabic-speaking. This group also includes Armenian Christians (about 3,000), Aramaeans and others. Most of them live in and around the Galilee and Haifa, others in central Israel (Jaffa, Ramla, Lod) and Jerusalem. Most Christians live in towns and villages with a Muslim Arab majority or in mixed cities. They are represented in all aspects of Israeli society – as individuals, judges of the Supreme Court, director of a hospital in the Galilee, in sports, members of parliament, senior executives in the high- tech industry. Even the Israeli ambassador to Azerbaijan is an Arab Israeli Christian.

“A large part of Israel’s Christian population, the Aramean Christians, have rediscovered their historical roots in the land”

In 2012, following the genocide and persecution of Christians in the Middle East, the Greek Orthodox priest from Nazareth, Father Gabriel Naddaf, called on the young members of the Christian community to volunteer for the IDF and National Service. He encouraged them to integrate into Israeli society in all aspects, and to be partners in building the State of Israel. He spoke to them as representatives of the Christian community, as a collective and not just as individuals. Many responded to his call and activities, and today enlistment in the army for national service is more acceptable among Christians than in the past. Many have become interested in their biblical and historical connection with the people of Israel. A large part of Israel’s Christian population, the Aramean Christians, have rediscovered their historical roots in the land.

Another group are the Druze – about 145,000 were integrated into the State of Israel and IDF under a law in 1956 enacted with the consent of the community leaders and the Druze religious leadership. The Druze live on Mount Carmel near Haifa and in the Galilee. They speak Arabic, and while their culture is similar to the Arab culture, it is a separate and independent religion and community, with unique traditions. They also have a connection to the Jewish people through Jethro. Jethro is viewed as a Prophet in Druze belief, named in Arabic Nabi Shu’ayb. Druze men serve in the IDF, most of them in combat units, and many senior officers can be found among the Druze. Druze women do not serve in the army but in recent years more and more have decided to volunteer for National Service.

In Israel you can find other small and special minority groups. For example there are the Circassians in Israel – about 4,000 people are Sunni Muslims from the Caucasus who came to Israel in the 19th century. They are, in fact, in the same position as the Druze, under the same law from 1956. They live in two villages in Israel, with their own language and traditions. One of the things that characterises their villages is the cleanliness of the streets. They are fully integrated and serve in the IDF.

Approximately 2600 Alawites all live in one village in the north, the border between Israel and Lebanon crossing the village.

“There are only about 850 Samaritans today. Half of them live on Mount Gerizim and half in Holon near Tel Aviv”

There are only about 850 Samaritans today. Half of them live on Mount Gerizim and half in Holon near Tel Aviv. Those who live in Holon are Israelis in every way and serve in the IDF, while those who live on Mount Gerizim hold Israeli citizenship, a Jordanian passport and are also citizens of the Palestinian Authority. Samaritan- owned factories also suffer from BDS and restrictions in Europe.

The Baha’is living in Israel today are volunteers who come for a limited time to serve in the World Baha’i Center in Haifa and Acre. On average, there are about 650 volunteers from 75 different countries in Israel at any given time, with about a third of them changing every year.

There are also several hundred Vietnamese living in Israel, who were absorbed by Israel between 1977 and 1979, after they fled Vietnam after the Communist takeover in 1975.

In the Muslim quarter of the Old City of Jerusalem, you can find a small number of Gypsies; even Israelis hardly know this.

Several thousand families of the former South Lebanese Army live in Israel. They arrived in Israel as refugees from Lebanon in 2000 after Israel withdrew from Lebanon. Most are Christian Maronite and Greek-Orthodox Christians, others are Druze, and both Sunni and Shiite Muslims. Most of them – especially the second generation – have integrated into Israeli society much better than Arabs and Christians born in Israel.

With this colourful cultural diversity, there is a lot to see, hear and eat in Israel.