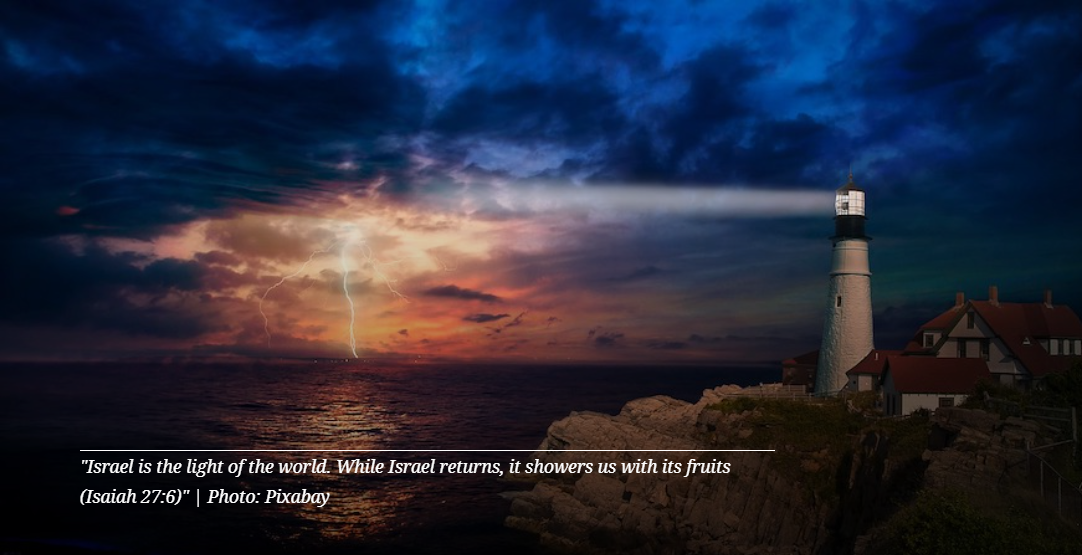 Israel, Light to the Nations

Israel has been chosen by God. But as God’s chosen one the people of Israel are also God’s servant with the high calling to be a light to the world.

“In the Book of Isaiah, we read that God created Israel to proclaim His praise (Isaiah 43:12)”

In the Book of Isaiah, we read that God created Israel to proclaim His praise (Isaiah 43:12). And that is what Israel has done. We don’t always think about that, but for centuries Jerusalem has been the only place on earth where God was honoured. The rest of the world was living in ignorance and darkness. But in Israel the Book of Psalms was written, in the Temple God’s presence was tangible, and there the priestly choirs sang to praise God. And I think to myself, imagine if the Jewish people had stopped doing that. Would our world still exist today?

The Word of God In the following chapter God says that Israel is allowed to proclaim everything that is yet to come (Isaiah 44:7). And that is what has happened. The entire Bible, not only the Law and the prophets, but also the New Testament was given to the world by Israel. The prophets and the apostles were Jews. Without Israel we would not have known about God.

Prayer Especially at the Feast of Tabernacles (Sukkot), but certainly on other moments, Israel prays for the world. So, that has been going on for centuries. While the nations vilify Israel, it constantly prays for the nations to get to know the Lord and walk with Him on the path of His commandments. We don’t always realize that: Israel intercedes for mankind. Israel also realizes that the future of the world is connected to Him. Psalm 67 – written in the menorah pattern when it is about the phrases: 2-2-2-3-2-2-2 – praying the Lord to bless Israel so that the world will see that God is the One.

History of salvation Right through the course of ordinary history God is on His way to renew all things, towards His Kingdom. We call that the history of salvation. And that history runs through the riverbed of Israel. That is why Israel is also called the head of the nations (Jeremiah 31:7). Israel takes the lead. The rest follows. When something happens in its existence, we see God’s footsteps becoming visible. Israel is the first to get acquainted with God’s salvation but also takes the first blows of God’s opponents.

Messiah When Paul mentions the eight prerogatives of his people in Romans 9, he mentions Messiah as the final and as pinnacle. The Son of God appeared in Israel and was born a Jew. In the Jew Jesus God’s heart is beating for Israel and for the world. Jesus Himself is also called the Light of the world. But he is that as an Israelite. So, when the apostle then writes in Romans 15:8 that Christ has become a servant of the circumcised (Jews) to confirm all of God’s promises to them, then those promises also contain the assurance that one day the nations will go up to Zion. Our future is indeed locked in what the Lord is doing to Israel.

“Israel is the light of the world. While Israel returns, it showers us with its fruits (Isaiah 27:6)”

You are the light of the world In the Sermon on the Mount Jesus calls His disciples ”the light of the world”.  The twelve apostles as Israel’s representation, will make His Name known unto the ends of the world. Insofar as the Christian Church does missionary work, that always remains a spin-off of Israel’s calling. And Israel does that in two ways. One part proclaims the message: “Prepare for the Kingdom. The time has come.” ”First to the Jew” (Romans 1:16). But if another part hardens oneself – and God has a hand in this – then this is to let the Gospel go out into the world: “But also to the Greek.” It is a special service, which Paul even describes with the words of the suffering and resurrection of Christ (see Romans 8:32 and 11:21 and verse 15!).

Israel is the light of the world. While Israel returns, it showers us with its fruits (Isaiah 27:6). And still, only in Zion the light will rise and God’s glory will be seen there. With that Israel is a bearer of hope. We owe a lot to the Jewish people.