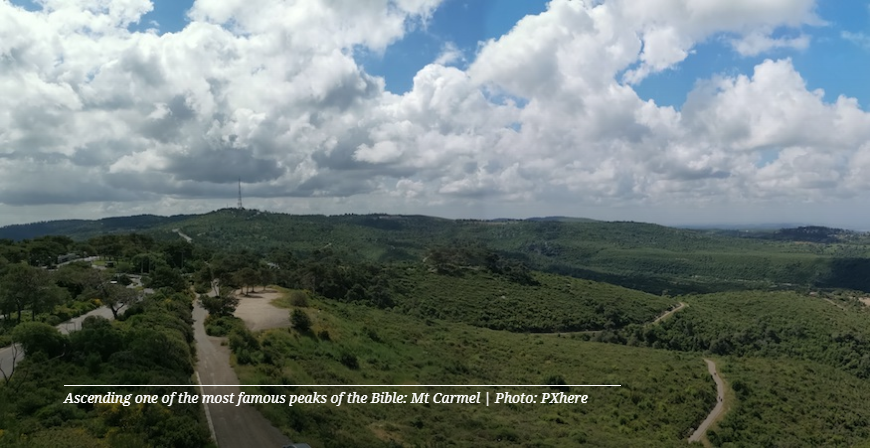 It has a special role to play in the geography of Israel and served as the stage of one of the most electrifying events in Scripture. While it has high name recognition, it is little known nor understood. In this edition of Walk Through the Land, we will leave the coastal plain and ascend one of the most famous peaks of the Bible: Mount Carmel.

The term ‘Mount Carmel’ is used only four times in Scripture, and ‘Carmel’ is used 26 times. While most references mean the mount, there is also a ‘Carmel’ southeast of Hebron in Judah. This is where Nabal and Abigail lived (1 Samuel 25:5).

Mount Carmel is the location of Israel’s third largest city and major port, Haifa. Its greatest acclaim was the famous contest between Elijah and the prophets of Baal held on or near its summit in I Kings 18.

Though we refer to it as a ‘mount,’ in reality Carmel is a mountain range that goes for 39 km in length, 6.4 to 8 km in width, and 450 meters in height. Unlike the majestic cedars in the high mountains of Lebanon, Carmel has predominantly scrubby woodlands. The range runs in a northwest-southeast direction, starting from the northwest corner of Samaria and continuing in that direction until it juts into the Mediterranean Sea.

Look on any map of the holy land and you will see how Mount Carmel redefines the otherwise straight coastal plain. To the south are the plains of Sharon and Philistia. To the north is the Plain of Acre. To the west is the Mediterranean and the east is the Valley of Armageddon.

As we learned in an earlier article, the ancient Egyptians called Mount Carmel and the ‘headland’ at Haifa, the ‘antelope’s nose.’ Apart from its striking appearance, this ‘nose’ had a very practical function: it stopped the Sahara Desert sand, brought via the Nile River, and delivered by the counter-clockwise Mediterranean current, from going any further north. Thus, the ports in the south were sand choked yet to the north they were functional. So, Israel relied on agriculture while Phoenicia became a great maritime nation.

Eventually, there was a trade-off between the two nations: Israel provided the food and Phoenicia with the shipping. This was noted in the days of Hiram king of Tyre (2 Samuel 5:11; 1 Kings 5:1), and even in the time of Herod Agrippa I (Acts 12:20). In every way, Mount Carmel serves as a natural boundary or ‘fence’ between Phoenicia and Israel, meaning the Plain of Acre was in Phoenician hands most of the Biblical period.

Being a high mount, Carmel was considered a sacred place. We know it had an altar to the Lord, which was broken down (1 Kings 18:30) and probably provided a high place(s) for Baal worship.

Apart from being a sacred site, it was also symbolic of beauty. Solomon wrote of his beloved that, ‘Thine head upon thee is like Carmel’ Song 7:5. Isaiah 35:2 speaks glowingly of the ‘the excellency of Carmel and Sharon.’ When Nahum 1:4 speaks the languishing or withering of Carmel, it is a sign of overflowing judgement.

On a Biblical tour, the main attraction is a visit to Muhraka (‘the Scorching’) on the southeast peak. It is the traditional site of the contest between Elijah and Jezebel’s Baal prophets. It has a stone statue of the Elijah, raising his sword to slay Baal’s prophets. Nearby is the Carmelite monastery and a nature reserve. There is a great view of the Valley of Armageddon, also known as Esraelon, and down below is the brook Kishon, where Baal’s prophets were slain after losing the contest. Also, at the foot of the mountain range is the site of Tell Megiddo, where Armageddon (Mountain of Megiddo) gets its name.

Contest on Carmel Elijah’s ministry corresponded to a time of horrific apostasy in the Northern Kingdom, which included the ten tribes of Israel. They were already in trouble with the Lord because of King Jeroboam’s sin, namely the sanctuaries to the golden calves in Bethel and Dan. To add to this scandal, King Ahab married a Phoenician princess named Jezebel. She was a zealous follower and missionary for Baal. Through her efforts, Baal worship quickly becomes the de facto religion of Israel.

Baal was the false god of the Phoenicians, Carthage, and Canaan. He was associated with agriculture and fertility. For an agrarian nation, his favour was highly sought. To appease Baal, his cult included sex worship, religious prostitution, and human sacrifice, particularly of children.

Such worship was an abomination to the God of Israel, and He raised Elijah of Tishbite from Gilead to deal with it. First, the prophet prayed for a drought to judge Israel, which lasted three and a half years. Then he ordered the contest on Mount Carmel with Ahab present, along with 450 prophets of Baal and 400 of Asherah. Whichever God answered by fire would prevail. Not coincidentally, Elijah asked Israel how long it would sit on the fence, figuratively and literally Mount Carmel. Baal failed the test; his prophets were slain and Israel confessed that the Lord is God.

Confession: Once Baal was defeated; the drought could be broken. Elijah confessed “I hear the sound of the abundance of rain,” though the sky was deep blue and there were no clouds (2 Corinthians 5:7).

Prevailing Prayer: He prayed fervently to break the drought (James 5:17).

First-fruits (Exodus 34:22): When finally, a cotton-ball cloud appeared, like the first-fruits of the crops, Elijah knew that the dark rain clouds would follow and warned Ahab as such. The clouds came, the rain descended, and the drought broke.

Walk through the Land for many more faith lessons.